So just what have I been knitting anyway

I have this grand idea that I can knit as fast as I can accumulate yarn in my stash. I look back and say to myself – gee look at all you’ve done over the past several months – and then I open the closet that is lovingly organized with all my yarns and realize I can’t knit fast enough to support my stash building habit. Luckily I know enough knitters who share this affliction so the guilt is fleeting.

So just what have I been knitting (and finished) anyway?

ng how much fun knitting small things was and hearing from a friend that her son didnt have a grandmother who knit for him I set out to knit a darling little hat for Jagger that his mom fell in love with from itty bitty hats. We had so much fun choosing the yarn. It didnt take very long at all which of course fed my love for immediate gratification. There was so much yarn left that I just had to mimic the stripes and make a scarf to match. 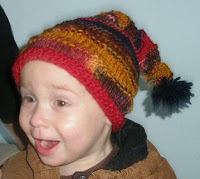 Of course the best part of the project was getting this adorable photo.

Next up on the active projects was a baby sweater for my friend Dee’s baby due to arrive this winter. The day that Dee found out she was carrying a girl we ran to the yarn shop to pick out girl patterns and yarns. Despite Dee’s obsession with all things pink, she selected this beautiful variegated lilac, mint and blue dreambaby dk. So soft. The pattern was a lovely cardigan with a peter pan collar – oh so proper don’t you know – I mean Dee is British after all. While knitting this sweater, my internal battle of “is it too small”, vs. “I want the baby to have an Auntie Heléne sweater right away” kept repeating in my head. 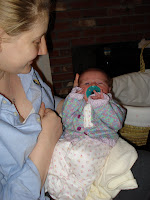 I stuck to my size 0 – 3 months and found that all the pieces all knit up pretty fast. I loved working on it. Sewing it together however, was another story – Yikes how many freaking seams do you have to mattress stitch on this thing. It was totally endless – but not as endless as Dee’s pregnancy started to feel to me (and to her of course!) – I was so excited for this little baby to get here. My finished sweater sat neatly in its little bag, waiting for me to sew the buttons on – that way it was still a work in progress don’t you know.

Georgia Mae arrived earlier this month (formally changing her name from Telullah – her in-utero name). Showing me instantly that she shared her mothers obvious wit and sarcasm by mocking my inner voice that worried about sweater size and weighing in at a delightful 9 pounds 3 ounces and measuring 22 inches in length – now thats a baby! Immediately in love I couldnt wait to see it on her. Ok I admit to being very relieved too – she still has room to grow in it for a little while (very little I’m sure) – way too cute – there will be more knitting for this child!

ased last fall
promising to make myself some fingerless gloves. I loved the yarn, and the princess mitts pattern deciding it had been years since I did a cable and it was time to give it another shot. I admit that I am living in these things this year. I live that I can still have access to my fingers, I also admit to being just too damn lazy to even think about wanting to take on a pair of gloves.

Watchcaps and Fingerless Gloves
So Bruce is one of those men that doesnt wear sweaters – which made having to deal with that whole boyfriend sweater curse thing much easier (for those non knitters the curse says once you knit your boyfriend a sweater he’ll break up with you). He does on the other hand wear hats. I always feel a bit badly that he never wants anything knit for him and constantly ask if he’s sure there is othing he wants. Finally, he told me I could knit him a hat to keep in his truck 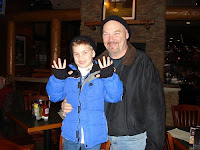 . The Marsan watchcap was perfect, as was the ultra alpaca that I chose.

He proudly wears his hat over when we went for dinner at his kids – and his grandson, Tyler promptly swipes the hat deciding that it is the perfect costume accessory to be a ninja. It was clear Tyler had no intention of surrendering the hat, so I told him that if he promised to wear the hat to keep him warm, and not just for ninja acivities that he could keep it. I love this kid – his response which was, ok, but I need matching gloves like the ones you have too! I couldnt say no and found a great pattern for fingerless mitts to complete the set. I’m happy to say I see Tyler wearing everything all the time.

Of course I had to replace the hijacked (or would that be ninjajacked hat). I start out on Bruce’s second hat. Mid cap, Bruce decides to propse and we run off and elope. The cap wasnt finished until he was my husband and therefore has interesting history attached to it. We have now totally eliminated the whole boyfriend knitting issue entirely – but he still doesnt wear sweaters.

Weekend Jacket
I havent only worked on smaller projects over the past few months. My biggest project

completed so far has been a weekend jacket that I saw in Knit ‘n Style this winter. I had finally found the perfect simple jacket to edge with the Prism Cool Stuff that I had spent a small fortune on over the summer. I discovered this awesome soft Berocco Cuzco yarn that I knew would be warm and best of all wouldnt even hint at itching. The obvious challenge was seeing all the stitches in the black yarn – the pattern was this modified seed stitch where every other row was just a purl row. Simple enough in theory but I swear this is the project that threw me over the edge into needing reading glasses on most of the time now when I knit (stupid 4o something eyes). I’m crazy over the edges with the cool stuff – although I still have a ton more of it and once again have to find the right pattern for it. I’m really happy with the way this came out and am anxiously waiting for the weather to be a bit warmer so I can put it to good use.

Well at least now I feel like I’ve caught up in preserving my projects for blog posterity as thats the recap of whats been on the needles…well not including socks. You see socks have become a a sub obsession of my general knitting obsession, so much so that they will require a post all thir own.